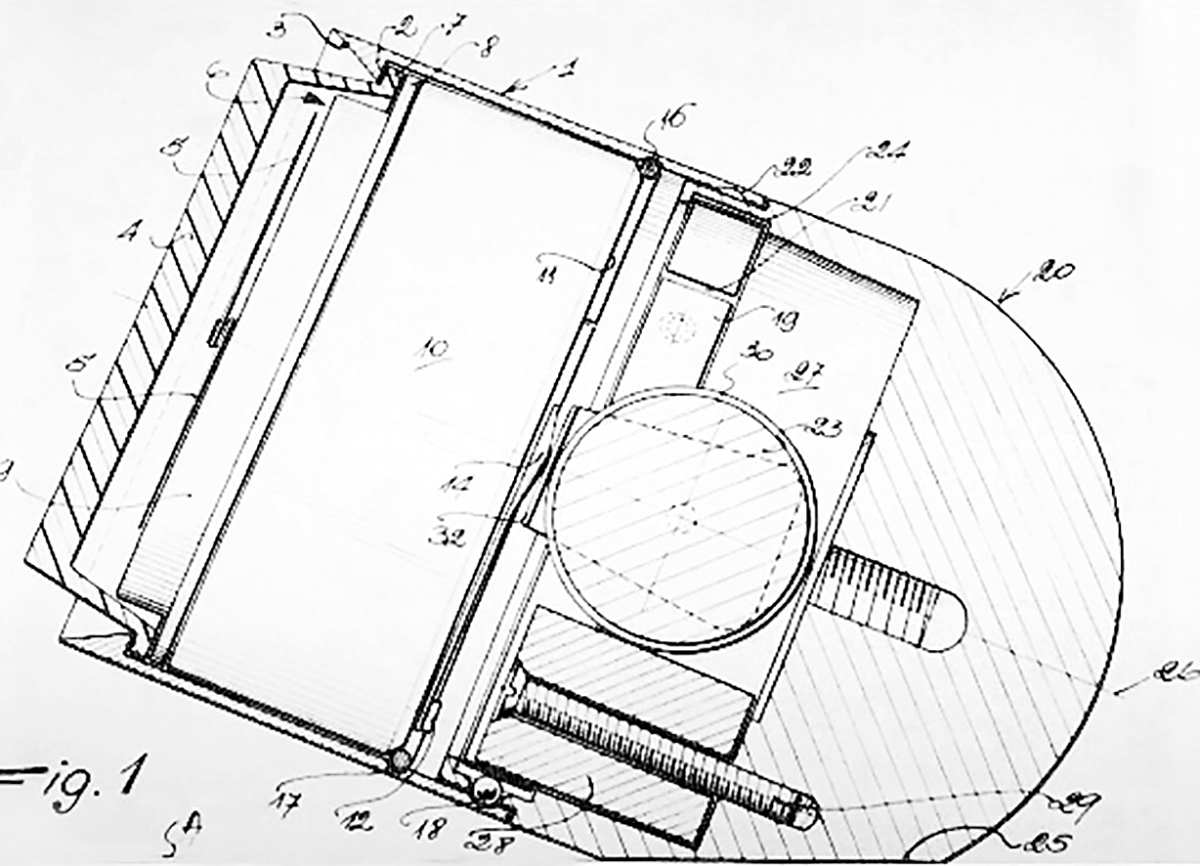 In the late 1950s, while still working at the design center of “La Rinascente” in Milan, Richard Sapper started to receive independent commissions. The first of these commissions came from the owner of Lorenz, a company that had been founded in 1934 in Milan as a manufacturer of timepieces. In his project – the Static table clock – Sapper’s interests in metal manufacturing and harnessing movement play out. The form was milled from a solid block of stainless steel with a counterweight to keep the clock perched upright, and causing it to roll back into its upright position should it be knocked over. The Static won the Compasso d’Oro award in 1960, when Sapper was 28 years old.

The origins of Static: “There was a secretary working at La Rinascente and I think she really liked me” begins Sapper. One day she got a phone call from a watchmaker, Tullio Bolletta, who told her that none of his timepieces had ever won the Compasso D’Oro award and asked how La Rinascente had gone about doing so. She told him: “You don’t have good designers. You have to hire a good designer to win the Compasso d’Oro”. And Mr. Bolletta asked: “Yes, but how shall I do that?” She replied: “Maybe I can suggest someone” and had Sapper in mind.

The secretary showed up at Sapper’s desk and said: “There is a gentleman who would like to talk to you”. And Sapper asked, “Why?” And the secretary responded: “He would like you to design a clock, would you be interested?” Sapper replied: “Maybe”. And she said: “Alright, I call him and then you can talk”. Sapper also added that he could not promise to win the Compasso D’Oro but he could try. The following day the secretary appeared again at Sapper’s desk saying “Here is Mr. Bolletta”.

At that time Bolletta had a problem which he explained to Sapper. During the war they had produced torpedoes with internal clock mechanisms that served as timers. But once the war ended, no one was interested in torpedoes anymore and so Mr. Bolletta purchased, at an extremely attractive price, a railroad car full of these clock mechanisms and wanted to use them to make table clocks.

Sapper had a look at the mechanism and studied the problem, which was not simple to solve because the mechanisms were very large and they needed a battery, which in turn would increase their size even more. Sapper designed a table clock which was suitable for such large-sized mechanisms. He proposed it to Mr. Bolletta, who agreed to produce it. The clock was quite difficult to make because it was only possible to open it from the front; the rest was a single round piece of turned metal. Then it had a small flat area, which was cut into the volume, for the clock to rest on a table. When the clock is toppled over, it will roll on the table, until it finds the flat area, and then it will stand upright again on its own. This was the Static’s “trick”. Sapper needed a typeface design for the clock’s face, so he went to the flea market in Milan looking for designs that would suit his clock. He saw a clock face from a fighter plane that fit, and so he had found the Static’s face.

This website uses cookies to improve your experience while you navigate through the website. Out of these cookies, the cookies that are categorized as necessary are stored on your browser as they are essential for the working of basic functionalities of the website. We also use third-party cookies that help us analyze and understand how you use this website. These cookies will be stored in your browser only with your consent. You also have the option to opt-out of these cookies. But opting out of some of these cookies may have an effect on your browsing experience.
Necessary Always Enabled
Necessary cookies are absolutely essential for the website to function properly. This category only includes cookies that ensures basic functionalities and security features of the website. These cookies do not store any personal information.
Non-necessary
Any cookies that may not be particularly necessary for the website to function and is used specifically to collect user personal data via analytics, ads, other embedded contents are termed as non-necessary cookies. It is mandatory to procure user consent prior to running these cookies on your website.
SAVE & ACCEPT